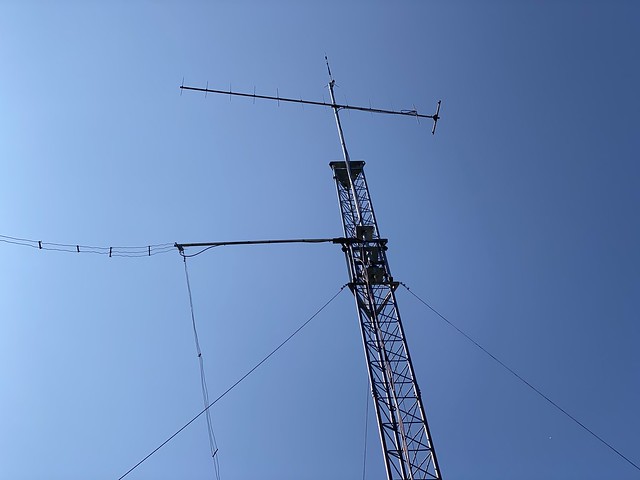 This past week, I finally decided to install the Alpha Delta DX-LB Plus multi-band dipole antenna on the tower. It was quite a job lowering the antennas to the ground, adding the 10 foot stand off and the antenna on the stand off. I have to say, I’ve had some pretty good performance on it as I connected it. My location is in central Oklahoma and my first call was on 17 meters QRP (5 watts) to Portland, Oregon. Shortly after that, I made a call and was answered in Trinidad and Tobago.

I am very pleased with the performance but I need to do some more work with the guy wire installation. As you can see in the image, there is an elevator installed and the guy wires are installed on the elevator. This leaves me in a complicated decision when severe weather comes. I have to choose between lightning or wind. The guy wires are going to have to be removed from the elevator and be installed on the tower directly. Though the tower is installed to be self supporting up to a 90 MPH wind, I still do not like having it without guy wires in the occasional high winds that Oklahoma is capable of having.

As it is installed now, if I lower the antennas to the ground, to protect from lightning, then the guy wires are lowered as well, leaving the tower with no protection from wind. That is my next project to fix this dilemma. That elevator is incredibly handy because as I get older, tower climbing is more dangerous. Not to mention, Oklahoma is notorious for wasps, and for some reason they love towers. Climbing a tower into a wasp nest is not a good situation to find myself. 🙂

I hope to get this fixed pretty soon but one thing you can count on with our weather is the summers are very hot. If I don’t get this fixed soon, the heat becomes and issue. I’ll post pictures when I get it completed. Thank you for stopping by.